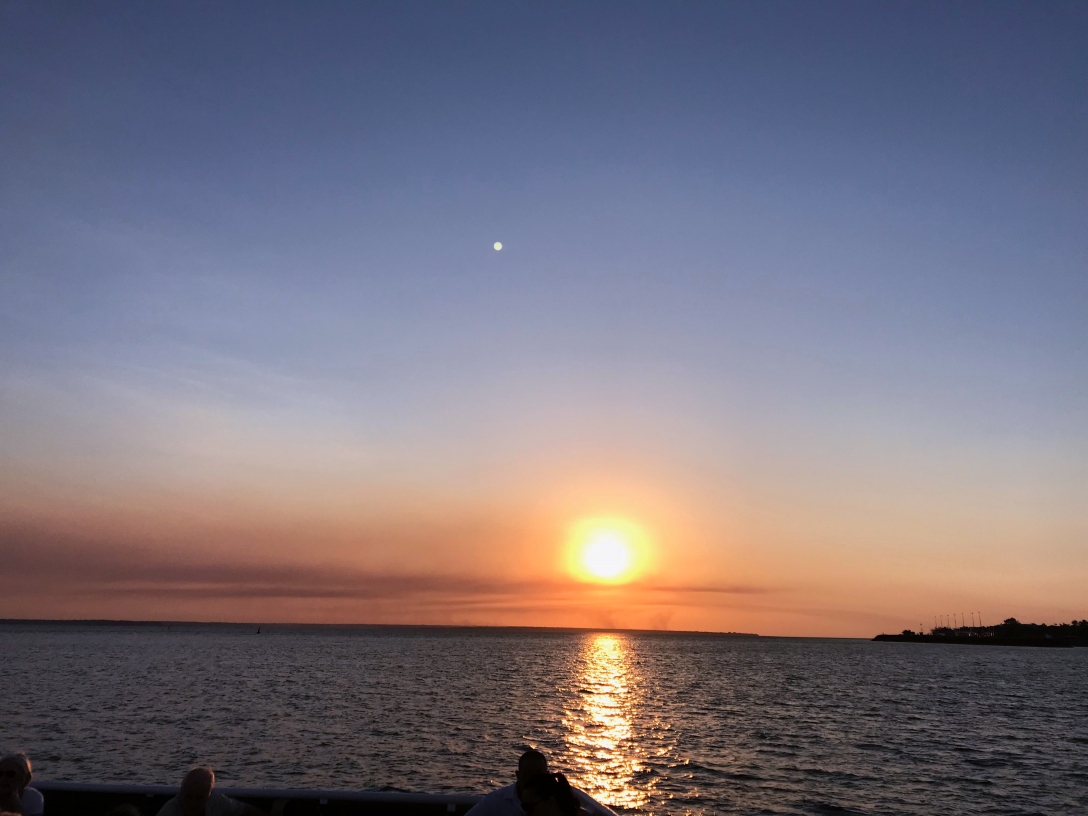 As the trip speeds up and we reach the Kingdoms of the Cattle Barons, the rhythm of the verse alters and breaks into a canter.

Was eaten with happy enjoyment.

And numerous flies partook of the feast

Because of their skilful deployment.

We kept them at bay as best we could

With the famous Australian Wave

And sometimes we swatted them dead on the plate

Just to teach those flies how to behave.

After the meal, a young lady in red

Pranced happily into the street.

A huge bull stood there with massive great horns,

She waved her red jacket right under his nose,

Then turned with expression superior.

But Ted, who was filming this all for TV,

Cried: “Watch out for the bull! Your posterior!”

The lady in red then quite lost her head,

The bull went on munching, while Ted, cam’ra crunching,

With a grin filmed this drama most frightening.

He’d made it all up – The bull hadn’t moved,

Just stood there all quiet and serene.

But the lady in red stamped her foot as she said:

That Friday in Winton the drovers played up.

They were quite well behaved, though, at first.

They came into town and invaded the pubs

Bringing with them insatiable thirst.

The blues mostly started at chucking out time

When the publicans turned off the grog,

The sheilas joined in, trading punches with glee.

They gave and received much contusion.

These cowboys were stoushing all over the street.

God! What an awful confusion!

The cop cars arrived and they turned up their lights,

But the cops didn’t join in the blue.

They smoked cigarettes while the stockmen got decked.

Then they drove off saying quietly, “Hooroo!”

The stockmen and gals at last settled down,

Battered and bruised and well worn.

They had cartons of tinnies they’d brought from the pubs,

Then stockmen and dogs with their sheilas and all –

Drove back to the bush to do some more work,

Leaving Winton once more quite respectable.

And northward, still northward our “My Way” Mob went,

Each day we became a bit wiser:

Then – oasis! The town of Mount Isa!

The Mount Isa Mine yields up fabulous wealth,

Isolation is conquered, the wilderness tamed.

And there’s civilisation instead.

The Railways of Queensland are keen on this mine:

The charges it paid for it’s freight

A sweet little cop for the State.

When the star spangled velvet soft cloak of the dusk

Thickens – gentle and slow – into night,

Then over the township the mine buildings watch,

Bejewelled with a silvery light.

Our old mate Hill Ted found under his bed

Words of many a popular song.

In our motel at Isa, in a way to surprise ya,

We yodelled and carolled along.

So everyone’s happy – Success to the trip,

Good on you, Teddy old son.

Congratulations from all of our mob

On a job that is very well done.

At the Homestead of Springvale we had a good night:

The guests were all Fourex beer slurping.

A talent quest held their attention despite

A great deal of belching and burping.

Four of our “My Way” mob entered the quest:

It was Ted Hill who held high our banner.

He sang “bye-bye Blackbird” and took out a prize

In his custom’ry debonair manner.

At the end of a quest a gal wandered home,

Turned the doorknob and switched on the lights.

The man on the bed she gave scarcely a glance.

She sank on the bed… The husband sat up.

“My Gawd,” screamed the lass. “I’m in Room Number One!

I should have been in One and Twenty!”

The man then yelled out: “By cripes! Who’s this?

I thought that… that… you were my wife!

Up to my eyeballs in strife!”

Another young lady of sixty and five

Hung her knickers upon the verandah.

In the night they would dry…But Ted Hill, very spry,

In the early morn took a quick gander.

He grabbed his equipment and then filmed the lot,

Made the knickers a picture enchanting.

Those knickers a major attraction will be

On the tape of our Mob’s gallivanting.

At Springs Mataranka that self same young gal

Her hubby had also lost track of his trunks.

Just what cooks in that old dressing shed?

And this claim is most probably right.

Certain it is that at the motel

The bed springs were creaking that night.

And if some good persons should have a few doubts…

By hell, we are going to use it up now,

And leave nothing at all for the worms!

So onwards to Darwin with Coach Captain Baz

At the wheel with all cylinders sparking.

No screaming, no bawling, no barking.

Of a sudden before us the blue sky was grey,

We found we were running a gauntlet of flame.

Should we stop? Is there time to turn back?

But Barry drove on through the furnace-hot fire

Til the coach was once more in the clear.

Everyone cheered, and Mavis proclaimed:

In Darwin just after (with Ted’s helpful hand)

We went to the gleaming casino.

Bright pokies and card games greeted us there,

And something that people call “Keno.”

We stayed there two hours and most dropped a few bob:

Coin is MADE round to GO round, we know.

But Vic came out smiling because he had beaten

The pokies … was rolling in dough.

Our folks hand-fed fish at the edge of the sea

With bread, which the fish suck and eat.

While Ted filmed all this, locals grinned as they watched,

Whisp’ring “Bottoms up! Ooh! What a treat!”

A catamaran took us out the next day

O’er the harbour so blue and so shining.

On the tropical isle of Mandorah we stayed

For an hour or so, swimming and dining.

And for fish don’t go past barramundi.

So we ate buff and barra this beautiful day,

(Which is Darwin’s main meal on a Sunday!)

Darwin’s a city most fair, there’s no doubt.

Were we younger in tones quite stentorian,

We’d say: “Let’s pack up mate and bugger the South.

Darwin is booming. The pride of the North

Is up and developing fast.

This NEW Darwin city will last.

Many in Darwin have never been south

To the site which gave birth to the Nation.

Instead they look north to horizons quite new,

Sydney and Melbourne are foreign to them –

Their fleshpots they calmly ignore.

Yet people in Darwin are thin on the ground

Who’ve not seen at least Singapore.

At Darwin the tides rise and fall many feet.

Quite natural it is that with such nasty things

There are very few swimmers around.

But when they say crocs waddle up the main street,

Be sure they are having a shot …

Unless your informant has been on the Bundy …

… In which case his brains gone to pot.

At the “Buffalo Shop” Mavis won some dried meat

Which will pregnancy stop – That’s a fact!

You take it NOT AFTER … and NOT YET BEFORE …

But INSTEAD of committing the act!

So farewell to Darwin – we now travel south:

Our schedule will not let us tarry.

All aboard, boys and girls, and move down the aisle.

Put the hoof on the gas, Captain Barry.

When at Springvale we stopped, bathrooms so small we found

That we really could not turn about.

We asked Mavis Senior: :How do you wash?”

She said: “Simple! Head first and arse out!”

On Ted’s shirt young Bev a large button was sewing.

(This is true because everyone’s seen ‘em).

Ted gave a loud squawk, said: “I think you have sewn

The button on my duodenum.”

The clean streets of Katherine come into view

South of Darwin. (Springvale’s down the street).

A further day’s drive down the bitumen, then …

You’ll find yourselves in Tennant Creek.

The manager of our motel at this town

Dashed around at a furious pace.

He was also the chef and, one would have thought,

Was engaged in some sort of race.

That night in the bar he produced a guitar,

His fine Russian eyes charmed the girls with their size.

… They were simpering, smiling and blushin’.